A two-player variation of the Spades card game 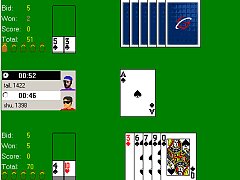 A popular card game Spades is now available to play online at Rubl.com games.
Spades is a trick-based game with trumps. The winner must be the first to score 500 points accumulated over several deals. Points are scored mainly for tricks taking during the play.
In two players Spades a standard 52 card pack is used. Cards ranks A(high), K, Q, J, 10, 9, 8, 7, 6, 5, 4, 3, 2(low). Spades are always trumps.

In opposite to the regular Spades game there is no deal in two-player Spades: the deck is placed face-down and both players take turns to draw cards. A player draws the top card, looks at it (not showing to opponent) and decide whether he/she wants to keep it. If a player wants to keep this first card he has to you put it in his hand and draw the next card, which he looks at and must then discard face down. If a player decides not to keep the first card he discards it face down and then draws the next card to put in his/her hand.
Each opponent must make a bid, which is the number of tricks he/she expects to take, out of the total possible number of 13 tricks or Nil bid (no tricks).
During a game a player leads any card except a spade to the first trick. The opponent player, in turn, must follow suit if able; if unable to follow suit, the player may play any card.

A player that takes at least as many tricks as its bid calls for receives a score equal to 10 times its bid. Additional tricks are worth an extra one point each. If a player does not make its bid, he/she loses 10 points for each trick he/she bids.

We ask you to login to play Spades - you can play live for free or for money if you buy playing tickets and win head-to-head tournament in Spades.   In head-to-head tournaments (a game for stake) you play against other players. The winner takes all.     If you are a new player just invent your user name, password and start playing.
Spades Books:

How NOT to Lose at Spades, Second Edition

How To Play Spades: A Beginner’s Guide to Learning the Spades Card Game, Rules, & Strategies to Win at Playing Spades