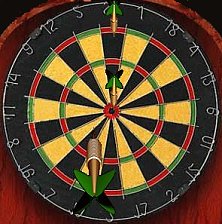 Each dart is scored by the number of the sector it lands on the target. The thin outer ring doubles these points, the inner ring triples them. Hitting the center ( the smallest black circle) gives 50 points, while hitting the small red circular area around the center gives 25 points.

We ask you to login to play Darts - if you get high score while playing any game you can win Arcade Tournament in Darts and Cash-Prize Pot.   In Arcade-style tournaments you play and compete against other players. A player who gets the highest score in a Tournament wins and gets Cash-Prize Pot!   If you are a new player just invent your user name, password and start playing.