Do you want to play Long Backgammon Online?

Or Install Backgammon App for Android or iOS 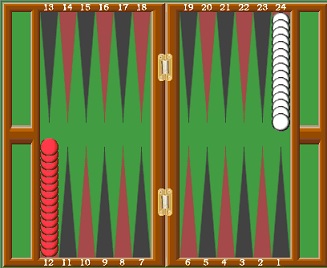 Long Backgammon (other game names are Long Nardi, Narde, Nardy) is a Backgammon family game, it differs from the Regular Backgammon by the initial set up, rules and by strategy. Long Backgammon is mostly a blocking game.
Long Backgammon is also a game for two players, played on the same board by 15 checkers of one colour for each player and two dice. The initial set-up is shown on the picture - all 15 checkers are set on the most-left position for each player in so-called "head".
The object of the game is to move all own checkers in the home board and bear off all of them earlier than the opponent does.
During the game the checkers are moved counter-clockwise to the "home" - the quarter of the board against the "head". It is possible to move only one checker from the head to make one move, except for the special case on the first move. If the starting dice throw is a double: 6-6 or 3-3, a player has the right to move 2 checkers from the head. The same is for the second player on the first move - because such throw of dice doesn't allow to complete the move by one checker.
Other distinction in rules for Long Backgammon and Regular Backgammon is that there is no "hitting" in this game. So if there is even a single opponent's checker on the point then it is not possible to put the own checker on this point. The second rule states, that while building the sequence of checkers the player has no right to create an impassable barrier (length of 6 and more checkers in a row) for the checkers of the opponent if there is no at least one checker of the opponent ahead of this barrier. So at least one empty hole should be left to bypass such a barrier.
Other rules are the same as in a Regular Backgammon game, but it is the different game of its nature and strategy

Long time you helped to improve games here on Rubl.com with your notes, suggestions and ideas. So that we would ask you a question if Rubl.com crew needs to implement this game - Long Backgammon, do you want to play it, maybe in a separate playing room. Vote for it!